Found this study long time ago, it discusses how a male's dominance (as rated by males) or attractiveness (as rated by females) correlates to their sexual success (self reported and corroborated by other men, since the participants were all frat boys who knew each other).
I thought it had some interesting results that I'd like discussing with the people on this forum. I'm also not that great at reading these, so let me know if I fuck up or misinterpret something.

I encourage you to read the study, especially the 'discussion' section, it's not very long.

'Dominance' was related to girth (IE muscularity) and a deep voice, and then you either had to have a very masculine face, or a very feminine face AND be very girthy to be judged more dominant.

'Attractiveness' was related to height, (and also face of course, if you look at the tables).

Female choice exerted positive directional selection on height and
stabilizing selection on an eigenvector that was heavily weighted by
girth. These results corroborate previous research ﬁnding that women
prefer taller males particularly for short-term mating (Pawlowski &
Jasienska, 2005), and that they prefer men of intermediate brawniness
(Frederick & Haselton, 2007). Moreover, both multiple regression
analysis and canonical analysis indicated selection under female
choice for negative covariance between girth and facial and vocal
masculinity, suggesting that the brawnier a man is, the more
important it is for him to have a feminine face and voice, and vice
versa. Female choice favored more attractive, but not more masculine,
faces and voices, and facial attractiveness became more important as
height increased. These results indicate that beyond height, masculine
features tend not to make independent positive contributions to
success under female choice, suggesting that other factors may have
operated in the selection of masculine traits in men.
Click to expand...

So basically if you have a nerdy face, you need to lift, but if you have a good face, it's better for you not to lift (as much?).

These results suggest stronger sexual selection through male
contests than female choice in the population studied.
Click to expand...

It's possible that women say they find one thing but respond well to something different, but regardless, the 'dominance' trait seemed to be a better indicator of reproductive success, which seems like it's something we have a degree of conscious control over.

My take away from this is if you're not naturally masculine, you should go to the gym and talk with a lower voice, while if you'r naturally tall and handsome, you can get away with being more of effeminate (in fact it's desirable).

Too long to read would be more interesting if you provided some pics like my high iqcel nigga @x69 . You should learn from him tbh
It's ogre ngl
Damn, cuck, you failed at this one might as well report this for not suiting my taste 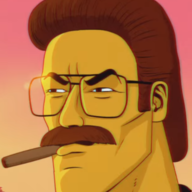 Oak said:
My take away from this is if you're not naturally masculine, you should go to the gym and talk with a lower voice, while if you'r naturally tall and handsome, you can get away with being more of effeminate (in fact it's desirable).
Click to expand...

This is a demonstration of the "moderation" theory, which has some truth in it because women would be actualy scared of a 6'8" 24" shoulders 10" dick zetachad, you got to be a very high E woman to be able to uphold that man, it would be too much "man" for the average woman to handle, that's why I think that in the majority of cases chadlites get it better than full blown chads ngl (not saying that full chad is fucked, not in the least)

everyone can get a GF except me💔

B
You must log in or register to reply here.

The link between race and attractiveness