Discussion Things that were meant to happen usually do, soon Rarely there’s lots of waiting involved for something that has demand and one or more individuals would really like it to happen.

Usually if there’s a profitable business idea, a private company will try to make profit off of it as soon as possible; else the government will have to step in and spend taxpayer’s money with delays, cost overruns and corruption.

Another example. If you are talented in something, it’ll become evident very early on - you’ll be discovered very early on. If you are struggling to keep up with people who put in not even half the effort you do, chances are you were not meant for that activity.

The same logic goes for human interactions. After meeting new people, you can more or less tell from a few minutes whether you’ll get along or not. Verbal communication makes up less than 10% of the information we gauge about other people, we humans are experts at picking up cues subconsiously about others - society just sometimes tells us to ignore these natural insticts of us. Chances are if someone is not symhatetic to you right at the start, you won’t really be friends later on either

Attraction toward the other gender is perhaps the best example. We don’t have to spend months and years to find out whether we like the other person, our brains decides in miliseconds whether we see them as potential mating partners or not. Our subconsious takes into account everything, deciding for us whether or not we could create a healthy offspring with the other person

This is why chit chatting with girls and personality in general are bogus. You can go ahead and ask girls for sex without saying Hi on Tinder and you’ll get two kind of replies; either Yes on the spot, or they will ridicule you, report you or just say No.

In either case waiting more would be a waste of time. The second she seen your face, she knew the answer to your question. Now you may say “But most girls aren’t like that, they are not that easy, they won’t just offer sex for a stranger - after all they’ve been told all their life by their father not to trust random guys”. That’s true but those rules were put in place for them to be broken for the right guy.

Lookism is real, I’ve seen it myself with my own eyes way too many times. If you don’t believe it, run chadfish experiments. Morph your face, give yourself a better jawline or do a nosejob. You’ll get treated differently

Girls are glued to their phones in 2022. If you messaged them and they don’t respond in a minute, accept it that your chances of ever reaching their attention through their fog of orbiters is decreasing by the second 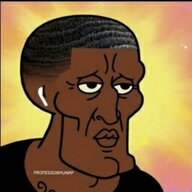 Banned Till Lean - No DMs

Brutal punch in the chest

what got you writing these essays as of recently
D

Boy going through heartbreak, he fighting some demons

This one was inspired by thinking about in retrospect, all LTRs I had, we hit it off instantly. Whenever I didn’t vibe with the girl right at the start, it felt like forced, a Sisyphean task and indeed those relationships went nowhere

We get told a lot to try again if we don’t succeed first but I’m doubting that. We should listen to our instincts more. If something isn’t going smoothly right from the start, there might be a reason for it

Parents are cucking me from most looksmaxxes other than nutrition and gym, im gonna have to probably do most of them once I move out or they stop giving a shit (probably the latter tbh they have the energy and persistence of a sloth).
You must log in or register to reply here.