This is for people who are skinny fat. I saw a on reddit post saying: “ If bob weighs 100 pounds at 18% bodyfat, and has a total of 18 pounds of fat on him. He lean bulked and gain 20 pounds of muscle, he would now be 120 pounds, 20 pounds of muscle, and 18 pounds of fat still. Now bob is at 15% bodyfat. Question is, would this affect his face at all? Technically his bodyfat percentage is lower, but he still has the same amount of fat on him, so would his face look leaner or not? And then other questions arise, like if some guy like Tom holland is 10% bodyfat at 140 pounds, if he were to gain 30 pounds of lean muscle, would he be at like 5-6% bodyfat, so does that mean his face is the face of a man with 5-6% bodyfat but just not enough muscle? Is the total fat amount what matters or the bodyfat percentage, which one changes the face? 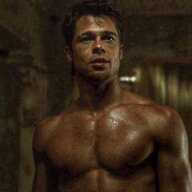 Why? It’s a legit question.
You must log in or register to reply here.

Blackpill Im almost clinically obese and my face is not bloated

When does your jaw usually stop growing?

Yesterday at 8:56 AM
House Lannister

LifeFuel How to lose fat and at the same time gain weight / muscle (lean)?

Looksmax How to plan a muscle gain/fat loss phase correctly